in august 2013, following the release of  group KILLSTREAK’s debut album Janus, tony the scribe moved to japan for five months. the details are hazy now, obscured by neon signs and bullet train breakdowns; what is left is the work. isolated in a bedroom outside nagoya for hours every day, tony spent his exile sinking into murakami novels and honing his writing to a bitter edge.  out of that bedroom came something altogether different than what went into it—something both softer and harsher.

a little more than two years later, we find tony the scribe snowed in at a house in northeast minneapolis, frantically working to reconstruct the last few years in sixteen bar segments. this is what implosion sounds like—half-sung harmonies wind around snares like broken glass, keys dissolve into a cacophony of reverb and delays. the roadmaps and designs for what he is building are lost; what is left is the work. what is left is fourteen minutes and fifty-four seconds of dark, cerebral, boom bap. what is left is mixed blood.

Posted by Unknown at 9:57 AM No comments:

hey. it's tony the scribe. i'll be releasing my first rap project since KILLSTREAK's "Janus" on june sixth, 2016. it's an ep called mixed blood. it's dark and vulnerable and i'm very proud of it. i'm looking forward to sharing it with you.

check out this promo video for it:

i'm going to be playing a release show for it on june ninth at honey (205 e hennepin ave, minneapolis). it's at eight pm, it's 21 plus, and costs seven dollars. big cats, eric mayson, and chance york are playing a joint set. cauzndefx, blaise b, and simon sed are playing too. 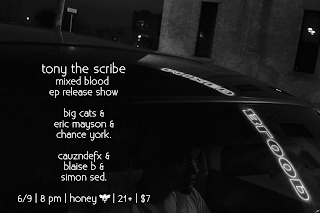 you can rsvp to that show here: bit.ly/mixedbloodrelease.

thanks.
Posted by KILLSTREAK at 12:48 PM No comments:

Posted by KILLSTREAK at 5:18 PM No comments:

So, since we've released Janus (Spotify link at the bottom if you somehow haven't heard it) , we've gotten a lot of really tight critical attention. Here are some excerpts and links to some of the press we've gotten recently!

"KILLSTREAK is Minnesota's next big thing." - 5xt for Cypher League

"5xt sits down with KILLSTREAK"
http://cypherleague.com/5xt-sits-down-with-killstreak

"Named after the Roman god of transitions (beginnings, endings, and the duality thereof), Janus is a record that attempts (and largely succeeds in) grand analyses of serious issues without sacrificing fun or wit." - Paul Thompson for Dead End Hip-Hop

"The radical rallying cries of Guante, the heart-on-sleeve openness of Slug, and the tongue-twisted flows of Eyedea are all present in Tony's vocals, but alongside the youthful intensity of Odd Future and some challenging electronic beats." - Jack Spencer for Gimme Noise, City Pages


"Their debut album Janus, a dark and charging effort, melds a confident strut with dusty, apocalyptic beats. The songs are serious and thoughtful but bristling with life, creating a banging soundtrack for a deteriorating world." - Josh Keller for Reviler

"If the first taste off KILLSTREAK’s debut album is any indication, Janus is going to be a great driving-with-the-windows-down hip-hop record this summer." - Andrea Swensson for The Current

"Janus is an impossibly ambitious record that sets out to lay indie rap sensibilities over a heavy EDM backdrop in an attempt to wrestle with a laundry list of Big Ideas like terrorism, love, and consumerism." - Paul Thompson for Music That Isn't Bad


Janus is now available on Spotify as well. Check it out here:


You can also stream Janus online at our bandcamp

Posted by KILLSTREAK at 1:03 PM No comments: